x
Note: This game is no longer available at Pogo.com. It was retired on December 1, 2020.

Play Bingo Luau at Pogo
Badges for This Game

Rank progress in Bingo Luau is earned through getting Jackpot Spins. You get one spin for correctly marking 100 numbers that have been called. You do not have to call bingo’s to earn rank progress.

If you are only interested in ranking up in Bingo Luau and don’t really care for the game, you can use the “Sharing Rooms”, which are under the Blackout tabs. It is probably best to use the Super Speedy rooms, as well. In the sharing rooms, you may not call a bingo before the first 70 balls are called, insuring that all balls will be called in every game and you will get the full 75 daubs per game towards your rank progress. This makes Bingo Luau a great game for multitasking. You can daub all of your cards and do something else while the game runs in the background. You just have to come back during the next game to daub your cards again.

If you really want to rank up fast, you can find players under the “Super-Speedy” and “Blackout” tabs that are running a “Route”. That means they have found a group of sharing rooms that they jump in and out of in a certain order. After one room has finished the game, they will jump to the next room in the route, and it’s game will be almost finished. You quickly daub your cards, get your rank progress, then jump to the next room, which will also be near the end of the game. If you can correctly follow the route, you will rank up 3 to 4 times faster than if you were just sitting in one sharing room. However, running the route does take your full attention (no multi-tasking!) and can be very boring and fatiguing. If you are interested, go to one of the sharing rooms when it has a few players in it and say “Rte please”. Someone should give you the order of rooms that are currently being used.

Bingo Luau is a free online Bingo Pogo game in which you have to mark numbers so as to suit the pattern displayed in the upper left corner, and you must be the first one finishing this task before a certain player calls “BINGO”. When the game has just started, every player has a chance to speculate when the B1 ball will be drawn. If you get a right guess, a token bonus will be directly given to you. The game features a lot of patterns which will switch from this game to another one. You are supposed to match all enough numbers in those patterns in the least amount of time possible. This game will give you a lot of tokens, and there are several awesome ways for you to earn them, including Bingos and Extra Bingos, Daubing Squares accurately marked, Team Bonus, B1 Prediction and Jackpot Spin. Let’s play it now!

Motor Town: Soul of the..

Motor Town: Soul of the Machine is a downloadable Pogo game about a young journalist who is brave to do..

Darkheart: Flight of The Harpies

Darkheart: Flight of The Harpies pits you against the evil presence that stole the souls of some villagers so he..

Agatha Christie’s: And Then There..

Agatha Christie's: And Then There Were None is a downloadable Pogo game revolving around an adventure of a group of.. 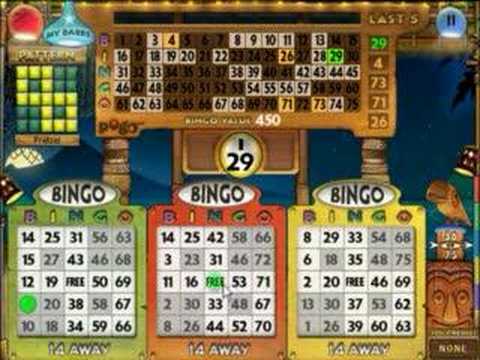 Queens Quest 4 Sacred Truce CE opens a story about the Elven King when he is being attacked and killed..