NO PURCHASE NECESSARY. A PURCHASE WILL NOT IMPROVE YOUR CHANCES OF WINNING.

ELIGIBILITY
The “Celebrity Home Game” (“Promotion”) is sponsored by Zynga Inc. (“Zynga”). This Promotion is governed by these official rules (“Rules”). By participating in the Promotion, you agree to abide by these Rules, including all eligibility requirements, and understand that the results of the Promotion and the interpretation of these Rules, as determined by Zynga and its agents, are final in all respects. The Promotion is subject to all federal, state, provincial, municipal, territorial and local laws and regulations and is void where prohibited by law. This Promotion is open to Zynga Poker players who reside in the U.S. and are 18 years of age or older as of the entry date. Zynga Poker players must login with Facebook or with Zynga Poker in order to enter. Players who play as a Guest will not be eligible. Void in U.S. military bases overseas and in Puerto Rico. Employees of Zynga or HelloWorld, Inc. and/or their parent and affiliate companies, as well as their immediate family members and persons living in the same household, are not eligible.

Zynga reserves the right to conduct or have conducted a background check on any potential Grand Prize winner as a condition to receipt of a prize. Potential winners may first be required to submit to such background check and cooperate with Zynga in any way that Zynga requests in order to be eligible to win. Zynga reserves the right in its sole discretion to disqualify any person based on such background check if Zynga determines in its sole discretion that awarding the prize to such potential winner might reflect negatively on Zynga, Facebook Inc., Brad Garrett, or any other person or entity involved in the Promotion.

This Promotion is in no way sponsored, endorsed or administered by, or associated with, Facebook, Inc., Instagram, or Twitter. Any questions, comments or complaints regarding the Promotion should be directed to the Zynga, and not to these platforms. 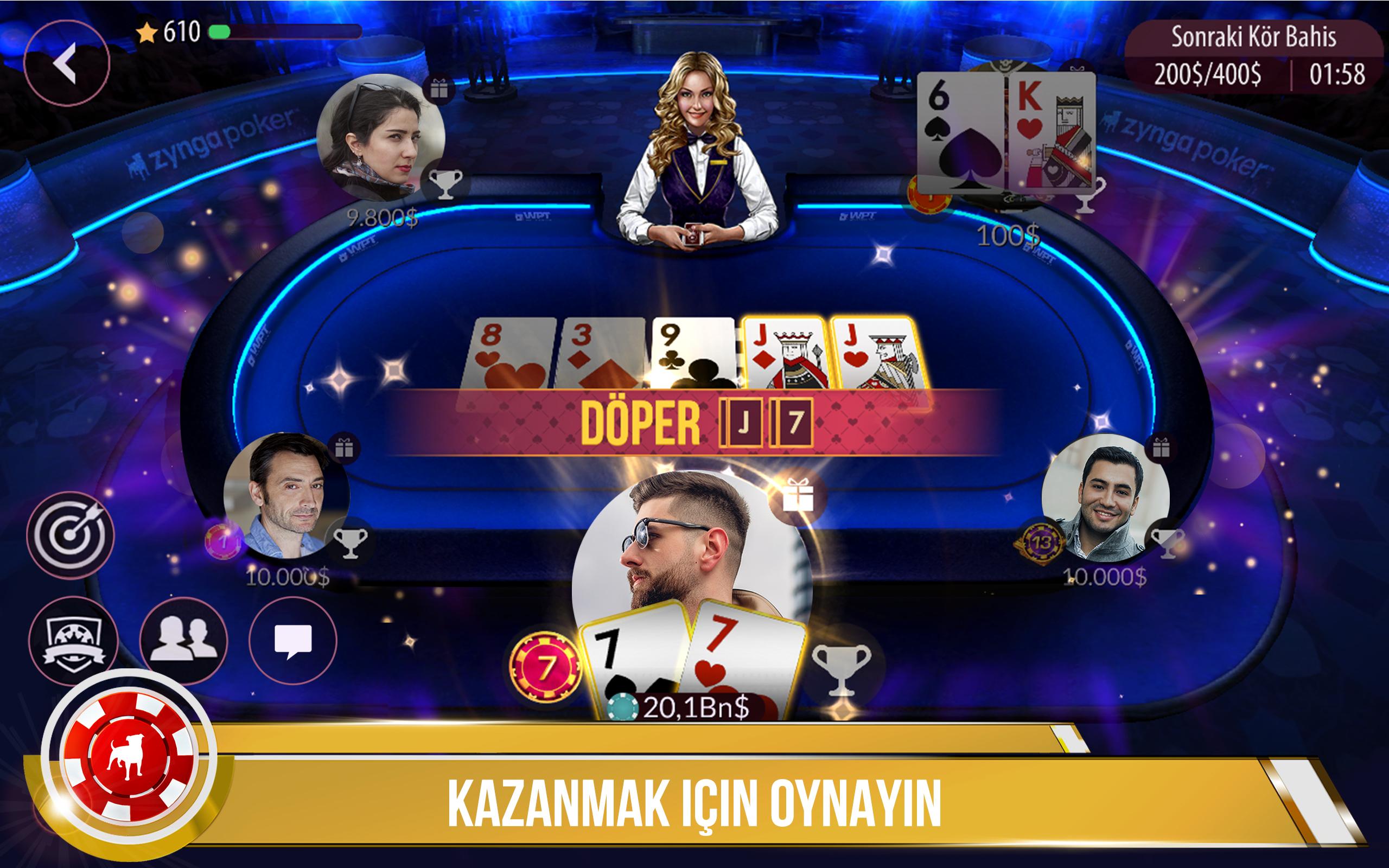 By submitting your entry, you give Zynga a perpetual and irrevocable (other than as provided below), worldwide, fully paid-up and royalty free, non-exclusive, license to use your entry and any modified and derivative works thereof (the “User Content”) for any purpose, including in marketing and promotions. To the extent allowed by applicable laws, you waive any moral rights you may have in any User Content (like the right to be identified as the author of the User Content or the right to object to a certain use of that User Content). You further understand and agree that your submission of an entry into the Promotion does not alter the legal rights, title, and interest in the Zynga Poker game, all of which remain the sole and exclusive property of Zynga.

If there are sufficient eligible entries, there will be a total of two (2) winners following the end of the Promotion Period. Odds of winning depend on the number of eligible entries received. Zynga anticipates that winners will be notified via email or telephone.

The potential Grand Prize winners will be required to provide certain additional information and execute certain additional forms, including a declaration of eligibility, non-disclosure agreement, and a release of liability and publicity, within two (2) days of notification. Failure to respond with such information and fully-executed forms within the two (2) day period will indicate definitively that the Grand Prize has been declined and an alternative winner will be selected. In the event an initially selected Grand Prize winner is disqualified or unable to claim the Grand Prize for any reason, including as a result of any background check, Zynga, in its sole discretion, may award the Grand Prize to an alternate winner. If Zynga determines in its sole discretion that a qualified alternate winner cannot be secured a sufficient time in advance of the Celebrity Home Game event, one or both Grand Prizes may remain unclaimed and the Celebrity Home Game may be played with alternate players of Zynga’s choosing.

PRIVACY
By entering, except where prohibited by law, you are granting Zynga permission to announce and use your name, city, state, biographical material and entry content in any media in perpetuity for advertising and publicity purposes. Zynga reserves the right to publish your first name and last initial to participants who request it. This Promotion, the use of any Zynga website, forum or game and Zynga’s use of any User Generated Content (UGC) is also governed by the Zynga Terms of Service, which may be located here.

ADDITIONAL TERMS AND CONDITIONS
Zynga reserves the right to cancel, terminate, suspend and/or modify the Promotion, or any part of it, if any fraud, technical failures, human error or any other factor impairs the integrity or proper functioning of the Promotion, as determined by Zynga in its sole discretion. Persons found tampering with, attempting to “game” the Promotion, tampering with the Promotion in any way whatsoever to gain an unfair advantage, violating the fair play or spirit of the rules, or abusing any aspect of this Promotion will be disqualified. Zynga reserves the right to correct any typographical, printing, computer programming or operator errors, including without limitation computer errors that erroneously award prizes.

INDEMNIFICATION AND LIMITATION OF LIABILITY
By entering the Promotion, you agree to indemnify, release and hold harmless Brad Garrett, HelloWorld, Zynga and its affiliates, subsidiary companies, and any platforms on which the Promotion may be entered into, including without limitation Facebook, Instagram, or Twitter, Zynga administrators, advertising and promotional agencies, attorneys, and all their respective officers, directors, employees, representatives and agents from any liability, damages, losses or injury resulting in whole or in part, directly or indirectly, from that entrant’s participation in the Promotion and the acceptance, use or misuse of any prize that may be won. Zynga and its parent, affiliate and subsidiary companies do not make any warranties, express or implied, as to the condition, fitness or merchantability of the prize. Zynga and its parents, subsidiaries, affiliates, advertising and promotional agencies, and all their respective officers, directors, employees, representatives and agents disclaim any liability for damage to any computer system resulting from access to or the download of information or materials connected with the Promotion.

DISPUTES
Except where prohibited by law, all issues and questions concerning the construction, validity, interpretation and enforceability of these Rules, or rights and obligations of entrants and Zynga in connection with this Promotion, shall be governed by, and construed in accordance with, the substantive laws of the State of California.

WINNERS LIST
To obtain a winners list up to 120 days after the promotion end date, go to https://www.zynga.com/homegame.

Zynga Poker Free Chips:- What’s up Zynga Poker fans, hope you are doing good. We are sharing here best & updated Zynga Poker Free Chips. All your most loved pokie recreations straightforwardly from the club floor are allowed to play. Appreciate an energizing assortment of pokie extra adjusts, from free twists to intelligent rewards.

Now let’s talk about Zynga Poker. This game is especially for the social-networking website. Developed by Zynga You can enjoy this game on Facebook as well as Android, iPhone, Windows Phone, Windows, MySpace, Tagged. This game was developed in 2007 by three developers named as Justin Waldron, Michael Luxton, and Eric Schiermeyer. They also organize live tournaments every year. You can also enjoy it. Below I will share with you some Zynga Poker Hackes and Zynga Poker Free Chips.

XAFA9N4:- Use this Promo code to get 10 million chips in free.

Y8H5YLM:- This offer code will help you to earn more than eight million coins. This offer is only for new users. So grub it hurry.

HRN5K3A:- This code is also named as jackpot code. Use this and enjoy unlimited gifts.

9AQ3YNN:- This is a lucky coupon you will get unlimited chips by using this. Some Users gets in million or some in thousand. So you too try your luck.

Zynga Poker Game is very popular in worldwide also in between social media. This game is played worldwide by millions of people across the world. If you good player in Zynga then you can also check your gambling skills too. They also organize Live tournaments in which 5 to 9 players can play at a time. Bellow, I will discuss some new Addictive Features of Zynga Poker Game.

Poker enthusiasts can play poker on the Zynga poker app. On this app, you can access many features easily in your smartphone anytime from anywhere. To get Zynga poker app you need to visit the play store for only android users, and iPhone users can download the app from apple store. Eventually you don,t need to go anywhere to download the app below we have given the links click over the link to download the app and install the app. This app has received a great rating of 4.5