This was Carroll’s 29th recorded tournament title, and it brought him within striking distance of $5 million in career earnings. This was the fifth-largest score on Carroll’s resume, with his two largest being for his WPT main event wins earned in the 2014 Bay 101 Shooting Star (a $1,256,550 top prize) and the 2019 Seminole Hard Rock Poker Showdown (a $715,175 top prize).

Carroll has a chance to become a three-time WPT champion in the near future, as he is among the final six players at the 2020 WPT L.A. Poker Classic final table which has been delayed since the start of the COVID-19 outbreak. Carroll will enter the final table in third chip position when it is ultimately rescheduled this year. 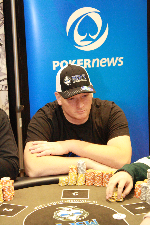 Carroll had come into the final day in 36th chip position among the final 133 players, but he managed to battle his way into the chip lead by the time the eight-handed final table was set.

He scored his first elimination of the final table when his K-Q held up against the Q-J of Veselin Dimitrov (6th – $28,383. After that Carroll went on an absolute tear, busting each and every one of the remaining competitors on his way to the title. He started this final spree by busting Bill Lewis (5th – $38,170) with top set against Lewis’ top and bottom pair. He then knocked out Daniel Sammarco (4th – $57,745) and Daniel Jones (3rd – $84,171) to take a sizable lead into heads-up play against William Chao.

In the final hand of the event Carroll raised to 400,000 on the button with A9 and Chao three-bet to 1,360,000 from the big blind with A6. Carroll four-bet all-in and Chao called to put himself at risk. The board ran out 874A8 and Carroll’s superior kicker played to earn him the pot and the title. Chao took home $135,277 as the runner-up finisher.

Here is a look at the payouts and POY points awarded at the final table:

Super Bowl LV action featuring the Kansas City Chiefs and the Tampa Bay Buccaneers will hold on February 7 in Tampa Bay. Ahead of the Super Bowl, the Mid-States Poker Tour (MSPT) Bowl V will commence, promising a guarantee of $350,000. The $1,100 buy-in Poker Bowl V will kick-off with a mega satellite on Wednesday, February 3. Two seats are guaranteed into the Poker Bowl V through the $200 mega satellite event. The main event will commence on Thursday, February 4, with one of the two starting flights – Day 1a. Day 1b will start at the same time on Friday, and at the end of that day, the finalists will be revealed. The showdown will happen on Saturday, February 6, which will be played down to a winner. The schedule of this event is timed perfectly so players can have enough time to enjoy the Super Bowl LV on Sunday.

The event will hold at The Venetian in Las Vegas, as it has always been since its inception in 2017. All players will start the tournament with 25,000 in chips, with 40-minute levels. However, the $200 buy-in mega satellite will feature 20-minute levels and start players with 10,000 in chips.

Even with such a guarantee, the Poker Bowl V is only a part of a much larger event that guarantees over a $2 million prize pool. The Venetian 2021 Deepstack Extravaganza Poker Series is the main event that will feature the Poker Bowl V as part of its schedule. The parent event will kick off on February 2 and will play host to 35 tournaments, of which the Poker Bowl V one.

With the MSPT guarantee and its relevance in the sporting world, you would think that it is the main attraction of the schedule. That is, however, not the case as the highlight of the series will be the $500,000 guaranteed $2,500 buy-in Card Player Poker Tour (CPPT). That event will run from February 19 till the 22nd.

It will be an exciting February in the world of poker, especially in the 2021 Deepstack Extravaganza Poker Series, as there are tournaments of different formats and buy-in amounts that can accommodate all types of poker players. As a poker player looking to make some money early in the year, you should make your way to the Venetian and get a piece of the action and prize pool.